First, we won’t be flying until Sunday, March 4 at the earliest. Weather has delayed some set up and deliveries.

Second, we are extending the NOTAM period for flights until 4:00 pm each day so we can make up for weather delays if we need to.

The NOTAM for operations over airport property north of the Army Guard and WEST of the departure end of Runway 32 is below:

There is another NOTAM that is 2 NM further north than this one listed. Note that it is filed under RNO because the airspace block extends more than 5 miles away from RTS. The center of mass of this area is east of the HBarH private airfield.

Third, and last, on Monday, March 5 we will likely be hovering a drone just behind the west end of the grandstands for a signal interference test. I don’t plan to NOTAM this because is should be below or no higher than the grandstands. Watch for the coned-off area.

I attached a picture that generally depicts the airspace we will be using for this testing period.

Lemmon Road cut through the Stead airport is closed until this testing is completed.

The flight area is shown in the attached picture, with one addition. There is a planned test behind the RARA grandstand that will be no higher than the top of the grandstand. Most of the flights will be over airport property below 400’ AGL. There is one series of flight test cards that have an aircraft headed north of the airport up to 1,200’ AGL per the FAA Certificate of Authorization.

All flights will be under visual observation and drone crews will be on 122.7.

Because we have low level flight testing over the northern part of airport property, the Lemmon Road gates allowing public vehicle traffic to pass thru airport property will be closed for this period.

As you all know, Runway 8/26 at Stead will be closed for construction on March 5, 2018. This means that all of our manned traffic will be using Runway 14/32. Traffic arriving from the North-Northwest should maintain above 7,000’ MSL until in the traffic pattern, so you can pass over the drone flights. Avoid straight-in landings to Runway 14 and straight-out departures from Runway 32.

For our friends at other airports, and locally, please share this info with pilots/CFI’s. Due to the construction concentrating our traffic on one runway, and drone operations, please be extra attentive if you choose to use RTS during this next week. Everyone will be getting used to new traffic flows and this will be compounded by drone testing. NOTAMs will be posted, but this picture is much better. 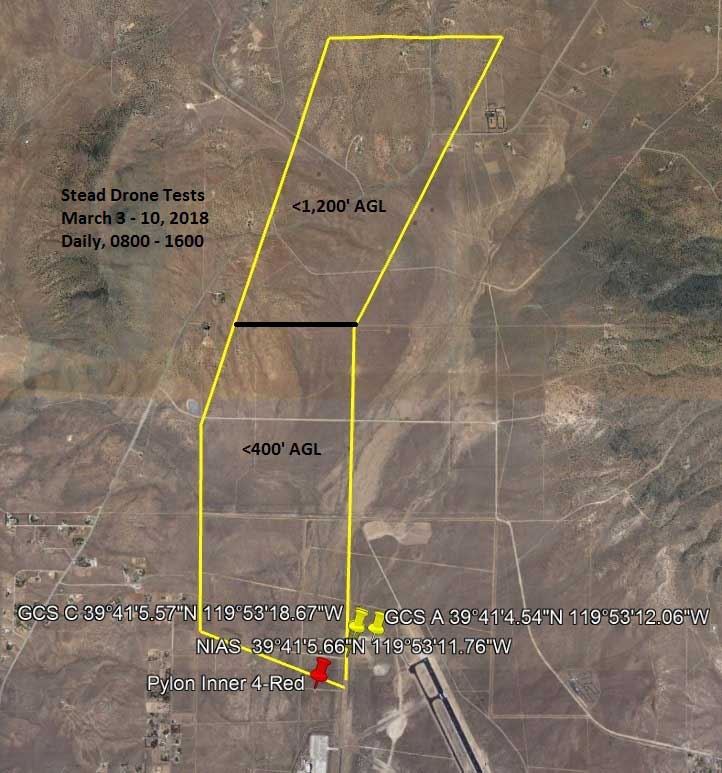