Link to PDF Version of the Newsletter.

More than 126 northern Nevada children, ages 8-17, took to the skies at the Reno-Stead Airfield on Saturday, June 25 during Young Eagles, a one-day flight camp held in conjunction with the Reno Chapter of the Experimental Aircraft Association (EAA) and co-sponsored by the Reno Air Racing Foundation, SAUA and RTAA. Young Eagles offers local youth the chance of a lifetime as they participate in demonstrations, displays, tours and other exciting flight-related activities.
The Reno Area 99’s team was on-hand to offer a ground school, along with the Challenger Learning Center which offered students simulated space missions. After an adventurous day, the event culminated with the exhilarating opportunity to ascend into the Northern Nevada sky with an expert pilot from the Reno and Carson City areas,  many of whom belong to SAUA. Thirteen pilots volunteered their time and their planes to make the flying dreams come true.
“We are happy to take part and provide SAUA pilots and static aircraft displays in this
exciting opportunity for local youth who are interested in aviation,”  said  SAUA President Tom Hall. “It is so important to begin educating the future members  of  the aviation community at a young age and we are proud to be able to help with that.”
Also, SAUA Treasurer Dave Miller arranged for over 50 vintage and new cars to be on display for this beautiful event.

Harrison Ford lands his green Citation jet on the tarmac of the Santa Monica airport, then heads to his sleek offices overlooking the runway. The graying action star looks fit and appealingly weathered. He wears a tiny silver hoop in his left ear, which Han Solo fans on the Web lament as an unhip vestige of a midlife crisis.

Settling into a chair in a conference room, Ford leaves the door ajar so he can keep a protective eye on his plane as his copilot prepares to stow it in its hangar.

In 1995 he fulfilled a lifelong dream of earning his pilot’s license.  “I wanted to see whether I could learn something new,” he says, “especially something really challenging on a technical level that requires hands-on skills.” He completed rigorous training for both fixed-wing aircraft and helicopters, and has logged some 4,500 hours in the air. Today his fleet includes a chopper, a 1929 open-cockpit plane and a transatlantic jet. Ford flies himself to movie locations, transports his family on vacations, and has made many transatlantic flights.

“Flying absolutely reinvented my life,” he says. As a pilot he can reclaim a measure of privacy, escaping the paparazzi who hound celebrities in public airports. Piloting also allows him to sidestep special treatment—the aspect of fame he most dislikes.   “When I’m flying, I’ve got to do it according to the rules, just like everybody else,” he says. “I’m not cut any slack for any other reason. I’m just another pilot. I love it.”

And aviation has opened up a world far from the insularity of Hollywood. Ford has been active with Young Eagles (an organization that exposes children to the magic of flight), giving hundreds of kids rides in his planes. He also embarks on rescue and humanitarian missions. In 2000, as a member of Wyoming’s Teton County Search and Rescue Volunteers, he saved a dehydrated hiker stranded in the mountains; the young woman was stunned when Indiana Jones swooped down in his Bell 407 helicopter. The following year Ford rescued a 13-year-old Boy Scout who had wandered off a trail and spent a rainy night lost in the wilderness near Yellowstone National Park. Though the boy didn’t get Ford’s autograph, he told his friends he got something better: a hug. After the 2010 earthquake in Haiti, Ford flew doctors and supplies  to the remote town of Hinche, buzzing the airstrip to clear it of goats and chickens before circling back to land. Rather than tour devastated areas trailed by news crews, Ford kept a low profile. “It was a small contribution,” he says.

The Annual SAUA BBQ was held June 18, with 57 + people attending. Our thanks to Dave Miller, Lew Gage, Steve Katzman, Carman Gage, Patty Edgington & other crew who organized the event.
Our appreciation also extends to Krys  Bart, RTAA President/CEO, for support, along with Dave Wilbern, RARA Executive Vice-President; RTAA Trustees elected or serving, including RTAA Board President Randi Thompson, Bill Eck and Steve Katzman. RTAA Development Chief Tina Ifftiger and her husband Al attended as well.
RTAA  Architect  Dean Schultz reviewed  new  plans for  the  EOC building  to be constructed 2011-2012.
RTAA mascot Tommy made a special appearance.
Washoe County Commission Past Chair Bob Larkin attended for the first time and inquired about joining SAUA. An application for membership was immediately sent to him.

Gardnerville resident, Brad Bullion, who flies gliders from Minden-Tahoe Airport, received word this week that his flight to 27,400 feet in the mountain wave on April 2 qualified him for three badges and the Symons Wave Memorial Single Lennie Award.
The three badges are a Silver Altitude gain of 3,100 feet, a Gold Altitude Gain of 10,000 fett and a Diamond Altitude Gain of 16,400 feet.

The Symons Wave Single Lennie Award commemorates the life of Robert Symons, a renowned power and glider pilot from the Owens Valley who  advanced the art of mountain wave glider flight and whose name is attached to this award for glider pilots who climb to 25,000 feet in mountain wave.
“The flight lasted just over an hour,” Bullion said, “and the view from 27,000 feet was spectacular – I could see the Buttes and the southern end of the
Mendocino Mountain Range. Now comes the hard part — working on long distance cross-country soaring badges. But I’m looking forward to that challenge.”

Brad has flown gliders in Minden for just over a year and in that time has earned his private and commercial glider certificates from the FAA. He now flies as a ride pilot for SoaringNV, a local business that offers glider instruction and rides. Bullion said he has loved flying for many years, but confined himself to radio controlled flying until he was introduced to gliders in 2010. He is rapidly gaining wide experience in the different conditions that exist in the Carson Valley and will be flying for other badges in the future.

Minden sailplane pilot Gordon Boettger established a new northern hemisphere record on Tuesday, May 31, 2011, and increased the lead over the best
flight in the world so far in 2011.
Boettger flew 1,401 miles solo in his Kestrel sailplane in 13 hours, 17 minutes, topping the previous record flight of 1,367 miles set by Boettger and Hugh Bennett on April 20.
High winds along Boettger’s route up and down the east slope of the Sierra Nevada hit 66 mph in Gardnerville. A gust of 80 mph was measured near Lee Vining in Mono County at 3:54 p.m., as Boettger was soaring high above.
Those wind speeds and higher propelled the Kestrel to an average speed of 110 mph.
Boettger took off from Minden-Tahoe Airport on Tuesday morning and flew south to Little Lake in the Owens Valley Just north of Inyokern, California.
“―The flight was totally unplanned,” he said. “I haven’t flown the glider in a year and the plan was to go up and wring out the old cobwebs. But the weather turned out to be better than was forecast.”
Going south, Boettger had to negotiate a headwind in an aircraft that relies on the wind.
“―Southbound, I was bucking into the wind,” he said. “The Kestrel is an older glider, made in 72, and it’s a lot lighter, so when you’re pushing into a 60 mph headwind, you really have to push hard to get into the wind. But on the northbound legs, I was just hauling. I made it from Inyokern to Washoe Lake going 160 mph.”
He turned around and flew north. Boettger said he made the trip from near Inyokern to Carson City in 96 minutes.
“All with no motor,” he said.
The Sierra Wave generated a lift of more than 1,000 feet per minute at times. Boettger reached a maximum altitude of 28,400 feet above sea level.  Armstrong said the southwest tailwind generated ground speeds of 165 mph at times.
After making it north to near Hurlong, California, Boettger said conditions  weren’t looking too good as he flew back to Carson Valley and he was thinking of wrapping up the flight.
“Conditions were not looking that good, so I almost decided to just go in and land,” he said. “Then I picked up some more mountain wave, and kept  pressing south.”
Boettger said he thinks this will be the last big wind event of the season. The Sierra Wave tends to be a winter phenomenon.
“The mountain wave in the summer is pretty rare,” he said. “One of the things we have here is the opportunity to fly long distances. There are maybe two other places in the world where you can do this.”
Tuesday’s flight put Boettger No. 2 in the world on a Web site that tracks soaring flights on May 31.
He said one more 1,200-kilometer flight will put him over the top for the year. Boettger said it is difficult to get the people who are in charge of awarding records to take action.
Boettger, who is a cargo pilot, said he’d been watching the winds for weeks.  “I was gone for two weeks, and the wind has been blowing every day,” he said.
“It’s insane. At least there’s one guy in the Valley glad to see the wind blowing.”

Airport Manager Up for National Award

Minden-Tahoe Airport Manager Bobbi Thompson has been nominated for the General Aviation Airport Manager of the Year award by the National Air
Transportation Association.
Thompson was hired by Douglas County in May 2010 and brings more than 40 years of aviation and airport management experience. Over the past year, Thompson has led various efforts to improve safety, minimum standards, business processes and the long-term viability of the MindenTahoe Airport as a premiere General Aviation facility that supports soaring and sport aviation.
“Bobbi has been an outstanding addition to our management team and a great leader at the airport,” said Douglas County Manager T. Michael Brown. “We
are pleased that her efforts and the continued improvements at our airport are being recognized.”

She is one of six people in the United States nominated for the award. The winner will be announced later this Summer.

AVIATION AND THE ECONOMY

The Mandan City Commission received a report about the economic impact of its airport on Tuesday.
Representatives from the state Aeronautics Commission and Kadrmas, Lee and Jackson detailed the results of a statewide study it recently completed about airports. It determined that the Mandan Municipal Airport employed 31 people and brings in just more than $ 1 million in annual payroll.
The study showed Mandan had $2.3 million in on-airport impact and $329,000 in visitor impact.
The airport creates a total output for the city of nearly $4.4 million. Output measures how income from the airport turns over in a community.
The study said the airport is used for recreational flying, corporate aviation, air cargo operations, environmental patrols and flight training for civilians and the National Guard.

10. Spend some extra money on yourself
9.   Stop working ; free up your time
8.   Take a cross – country trip
7.   Buy a new airplane
6.   Stop dealing with bad tenants, dissatisfied partners or incompetent managers
5.   Spend more time with your family
4. Help your favorite charity or organization
3.   Give to worthy causes
2. Realize your financial dreams
1. Life is too short – Fly more!

The Cost of Doing Business — An Amazing Tale

Most Americans who were not adults during WWII have no understanding of the magnitude of it. This listing of some of the aircraft facts gives a bit of insight to it.
Of 276,000 aircraft manufactured in the U.S., 43,000 planes were lost overseas, including 23,000 in combat. 14,000 planes were lost in the Continental U.S.
The U.S. civilian population maintained a dedicated effort for four years, many working long hours seven days per week and often also volunteering for other work. 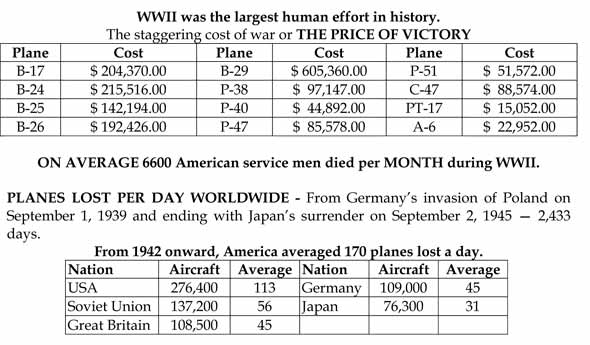