Link to PDF Version of the Newsletter. 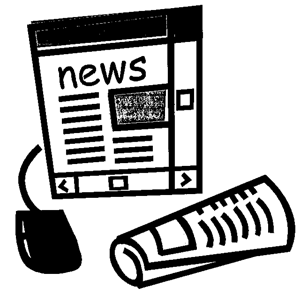 “I believe I have the Forum set up so that it is usable for everybody.
There is a link to it on the home page top menu bar. That link takes you to a page with a disclaimer and a link to instructions on how to access the Forum.

All visitors can view the Forum entries, but only registered users can leave a comment or start a new topic of conversation.

There is an instruction page available on the same page as the disclaimer. I welcome your feedback!” 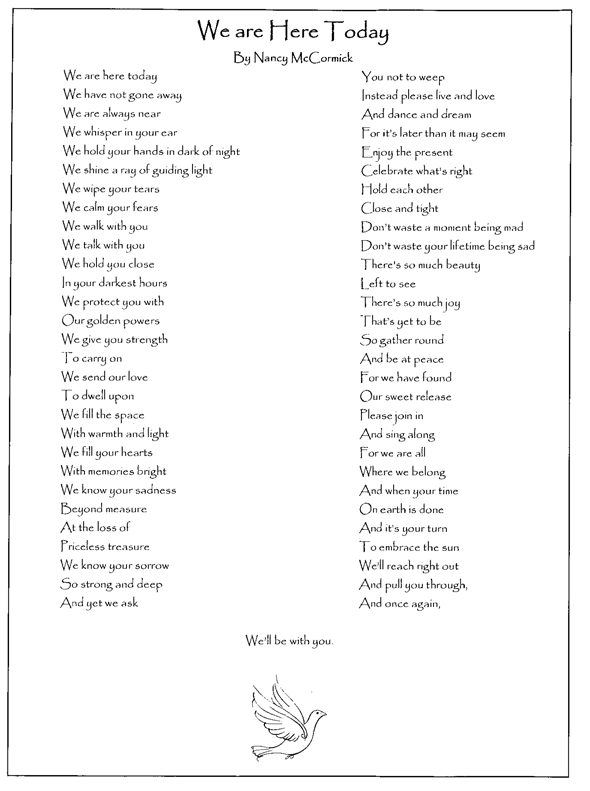 The goals of the study are to be reasonable and prudent in the imposition of any insurance requirements, and to arrive at a uniform policy, so that every tenant will be treated fairly and equally.

Ms. Bart has emphasized that the end result will be reasonable and fair to all affected parties.

The following is an excerpt from Wikepedia addressing aviation insurance:

Aviation insurance was first introduced in the early years of the 20th Century. The first aviation insurance policy was written by Lloyd’s of London in 1911. The company stopped writing aviation policies in 1912 after bad weather and the resulting crashes at an air meet caused losses on many of those first policies.

The first aviation policies were underwritten by the marine insurance underwriting community. The first specialist aviation insurers emerged in 1924.

In 1929 the Warsaw convention was signed. The convention was an agreement to establish terms, conditions and limitations of liability for carriage by air, this was the first recognition of the airline industry as we know it today.

In 1931, Captain A. G. Lamplugh, the British Aviation Insurance Company’s chief underwriter and principal surveyor, said of the new industry: “Aviation in itself is not inherently dangerous. But to an even greater degree than the sea, it is terribly unforgiving of any carelessness, incapacity or neglect.”

The London insurance market is still the largest single center for aviation insurance. The market is made up of the traditional Lloyd’s of London syndicates and numerous other traditional insurance markets. Throughout the rest of the world there are national markets established in various countries, this is dependent on the aviation activity within each country, the US has a large percentage of the world’s general aviation fleet and has a large established market.

Roser, 24, is a licensed private pilot and will go to the Navy’s flight school in Pensacola, Fla., after completing the 12-week OCS program at Newport, R.I.

He is also an accomplished golfer who played four years varsity golf for Carson High School while enrolled in Laurel Springs private high school for home-school programs, where he earned a 4.0 grade-point average.

He played in the U.S. Open qualifier at Genoa Lakes Golf Club in 2006.

Roser is the son of Randy and Shawnna Roser of Carson City and is active with his parents in pastoral duties at The Bridge Christian Church, which they founded in downtown Carson City.

After his service in the Navy, Roser plans to become a missionary pilot serving people being assisted by missionaries.

Reno Airport No. 2 in Efficiency Ranking

Reno-Tahoe International Airport was named the second most efficient airport in the United States and Canada by the Air Transportation Research Society, a Canadian-based academic research organization that analyzes and ranks airports worldwide.

This is the third time in six years RTIA has placed in the top five of the ATRS rankings. The rankings analyzed airports with fewer than 15 million passengers annually for 2010.

The structure of revenue streams is a factor in RTIA’s placement. RTIA gains 70 percent of its revenue from non-airline sources, according to the release.

Kids: Are you ready to fly?

“That was awesome! It was so fun,” 17-year-old Estacada High School student Shane Licari said with a huge grin as he stepped off the wing of a single-engine Piper Cherokee airplane last week at Valley View Airport.

Licari and local pilot Steve Miller had just spent an exhilarating half-hour in the clear skies above Estacada as part of an education program organized by the local chapter of the Experimental Aircraft Association.

Licari isn’t the only young pilot who can experience the thrill of flying in the Association’s Young Eagles program. A full day of free and educational flights for kids, ages 8-17, is being hosted by the Experimental Aircraft Association’s Mt. Hood Chapter 902 on Saturday, July 23, at Valley View Airport in Estacada.

The Young Eagles program gives local youth an up-close and personal flying experience complete with a full tour of an airplane and all its parts during a pre-flight walk-around, a tour of the plane’s instrument panel, and then taking off in the plane and going for a brief tour in the skies above Estacada. While looking at the skies above and the ground below, young pilots may even have the chance to fly the planes themselves. Licari was the 167th local youth to fly in the program.

“We usually take kids one at a time and they sit beside the pilot, and if they are comfortable, we will show them how to fly the plane,” said local EAA member Dick Scott, who is organizing the local Young Eagles day of flights. “We’ll do some gentle turns, fly around the local area, and if we can, fly over some of their houses.”

The Young Eagles program was started by the association with the intent of keeping kids interested in aviation and possibly sparking enough interest for those kids to go on and become pilots themselves. On the ground prior to a flight, a Young Eagles certified pilot will show the participants the airplane, identify the parts that control the plane, explain the aeronautical chart or map, identify reference points during the flight, and explain what will happen during the flight.

Just before takeoff, the pilot will help his or her student buckle the seatbelt and then describe the interior of the plane, including the instrument panel. In the air, flights will last between 15-20 minutes and are sure to be an unforgettable experience.

After landing, there’s more time for a new pilot to ask questions about the flight. Then he or she will receive an official Young Eagles logbook, which is signed by the pilot, and his or her name will be added to a long list of young Eagles in the World’s Largest Logbook.

Officials reported Monday that 3.6 million people passed through the airport last month. That was up 4 percent from August 2010.

About 28 million passengers used McCarran during the first eight months of the year–up 3.9 percent from the 27 million who passed through the airport during the same period in 2010.

When gambling moved from the back rooms to the front rooms of Reno’s clubs in 1931, Silvio Petricciani witnessed the transition firsthand.

Over the next 60-plus years — interrupted only by Army service in Europe during World War II — Petricciani remained at the forefront of the industry, owning or managing casinos in Las Vegas and his hometown of Reno, where his Italian immigrant parents had settled in the early years of the 20th century and purchased the Palace Club at Center Street and Commercial Row.

— Harrah, the Smiths from Harold’s Club, Nick Abelman, Bill Graham and Jim McKay from the Bank Club — they’re all gone.”

Petricciani was still in his teens and a student at Reno High School when he joined his father, Johnny, in the slot machine business, learning to repair the machines which were supplied to the backroom gambling establishments in Reno and Lake Tahoe.

When gambling was legalized in 1931, the Palace Club became one of Reno’s first casinos, and when he graduated from high school in 1935, Silvio Petricciani went to work there full time, learning every facet of the business.

He worked at the Palace Club until 1943, when he was drafted into the Army and served with the 1st Cavalry in the European theater, including the Battle of the Bulge. He earned a number of awards, including the Bronze Star.

While he was serving in the war, his father fell ill, and the family was forced to offer a 20-year lease on the Palace Club.

He returned to Reno after the war and worked for another gaming pioneer, Nick Abelman, at the Riverside Hotel and other gaming establishments before moving to Las Vegas in 1948.

Through the years, he built a reputation as a generous man, quick with a handshake, a hug or a story.

He managed a number of other gaming properties in Reno over the next decade.

In Reno, he was a civic leader, serving in Optimists Club, Knight of Columbus, the Reno Elks Lodge  and the Prospector’s Club. He served on the Airport Authority Board and was a charter member and director emeritus of the Reno Air Racing Association.

“He loved flying,” said Jim Lockridge, a fellow pilot and longtime friend. “I think he loved the dynamics of it and all the fraternity of it.”

Petricciani married Ann Avanzivo in 1936 and had two children, John Petriccianai and Silvia (Petricciani) Severson. Ann passed away, and Pettriciani married his second wife, Mary Jane, in 1962.  She died in 1963, and he married Helen Kaminski on July 9, 1965. They remained married until his death.

Three things a pilot needs – Altitude, Air Speed and Brains.
And a LOT of LUCK never hurts either!

To represent the interests of all Tenants on the Reno-Stead Airport including Aircraft Owners, Fixed Base Operators, Aircraft Repair Facilities, United States Government Agencies and all parties of interest;

To ensure that all Tenants have the opportunity to speak with a united voice to the Reno Tahoe Airport Authority (owner of the airfield facility), the Federal Aviation Administration and the Local Governments relative to safe and affordable flying in Northern Nevada;

To enrich and promote the reputation of General Aviation within our community; and

To promote a “Good Neighbor” policy with the Nevada National Guard, support facility improvements that enhance the Tenant experience and encourage affordable services, fuel prices and hangar rentals from all service providers operating at the Reno Stead Facility. 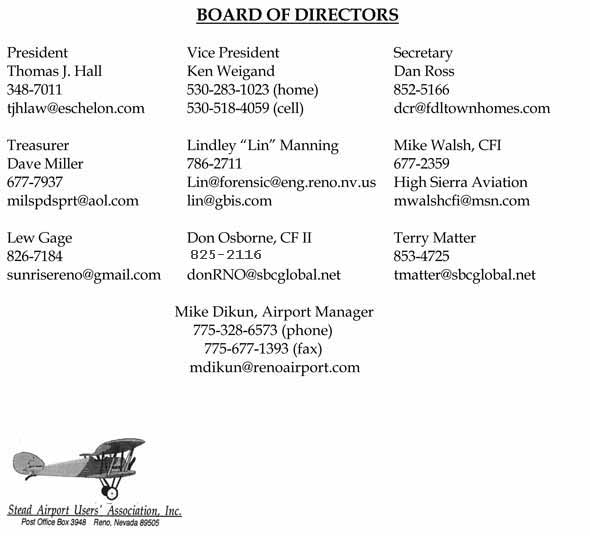