I would like to again bring you, the tenants at Reno Stead Airport up to speed on the 2014 Version of Pylon Racing Seminar (PRS) or “Rookie School” as we call it, and procedures we will ag be putting into effect to ensure safe ground and flight operations. The procedures that will be in effect in 2014 are pretty much the same as you saw in 2013.

To review, every year since 1997, the Reno Air Racing Association (RARA) has sponsored a four day training/qualification session for new race pilots to get them certified and for previously certified race pilots to practice for the races the following September. This year the dates are Wednesday, 11 June through Saturday, 14 June inclusive. Over these four days, the racecourse will be active during the better part of each day. Specifically, flying periods are 1030-1700 on Wednesday, 0800-1730 on Thursday, 0800-1600 on Friday and 0800-1730 on Saturday. There is a possibility we may cease operations a bit early on Thursday and Saturday. If this occurs, it will be announced on the Stead AWOS Broadcast. Race Control will be operational and controlling all Stead aircraft (akin to an FAA Tower) on designated Race Control frequencies 15 minutes prior to and until the completion of the above listed PRS flying periods. Race Control will monitor and initially control both departing and arriving nonparticipant aircraft on Reno Stead CTAF (122.7); more on controlling and frequencies later in the “Departure” and “Arrival” sections of this document. At times outside of the above training periods, Reno Stead Airport will revert to normal uncontrolled field operations. As an important theme, keep in mind, over these four days, there are going to be a lot more aircraft flying around than you are normally used to seeing during the non-racing 353 days of the year.

In addition, on Monday and Tuesday of that same week there will be FAST Training for a number of students in preparation for PRS. Aircraft types that will be participating in this training will be several “Sport” and “Jet” Class aircraft. There are no special procedures for this event (normal uncontrolled RTS procedures); )ust be aware there will be more aircraft in the vicinity= and in the pattern at Reno-Stead Airport
There WILL also be a TFR established during the four days of this year’s PRS. The effective time of each day’s TFR will match the flying period times listed previously in this newsletter and under “PRS Times” on your Tenant Procedures Kneeboard Card. The lateral and vertical limits (10,500 feet MSL) of the TFR will be published by the FAA and you will be provided with a graphical representation. Rest assured, since RARA (Race Control) is the controlling agency, there will be no impact to tenant operations if you adhere the procedures contained in this newsletter and Tenant Procedures Kneeboard Card. Additionally, the field will be NOTAM’ed as to the special operations taking place.

Several FAR Part 91 flying rules are waived for race aircraft only. The waived airspace is a 3nm by 4nm rectangle with the short side centered around and extending north from Home Pylon (that big Blue and White checkered thing with a Red vertical “RENO” written on it) from the surface up to 10,000 feet MSL. It goes without saying during the periods listed above, you must stay out of that box. As an aside and for your information, Home Pylon will be erected Monday morning 9 June.

Along with the airport staff, our goal at RARA and in Race Control specifically, is to safely integrate your required flying into PRS Operations including Race Aircraft Departures and Arrivals. As was the case in 2013, no non-participant aircraft will be allowed to depart or land while Race Aircraft are anywhere on the racecourse. However, three to four 15-minute non-participant departure/ arrival slot times will be established each day during the periods of PRS Operations to facilitate any required tenant flight operations. The specific slot times will be promulgated at a later date.

During PRS, hours of operations, a No-Prop/Jet Turn Line will be in effect West of the Grandstands. The double white and red line running west to east and then curving to the south, west of the Grand Stands defines this line. No engines/props can be turning south and west of that line with one exception indicated below. So if your aircraft is located at a tie-down/hangar south and west of that line, you must tow/push it to a position north of that line prior to engine start. However it is permissible to taxi aircraft north and south in the taxi lane west of the grandstands and east of the No-Prop/jet Turn Line (where it curves south). This taxi procedure applies primarily to those tenant aircraft situated in the midfield hangars directly behind the previous race control tower and the closed J&J Aircraft repair facility. From those hangars proceed east bound on the taxi lane south of those hangars and then turn north once you reach the north/south taxi lane on the west side of the grandstand. Departing taxiing aircraft from those hangars contact Race Control prior to arriving abeam the Grand Stands; inform Race Control that you are taxiing from the “Midfield Hangars”.

Talk to Race Control as you would to an FAA Tower. However, always use the call sign “Race Control” no matter what frequency you are up. The check-in frequency for taxi will be 122.7. Tell “Race Control” where you are on the field, where you want to go and state you have “Information PRS” after listening to the AWLS broadcast on 135.175. If departing, when checking in on 122.7, pass to “Race Control” your desired departure direction. Race Control will then direct you to taxi to the desired place on the field (say if you just want to get gas) or to the appropriate runway, based on the winds, if departing. If the winds are light and variable, they might ask you what runway you prefer. If you desire/are able to make an intersection departure, please pass that info to “Race Control” on initial check-in. If you are departing full length on Runway 26, request clearance to cross Runway 14/32 before crossing. Runway 14 is the primary emergency-landing runway for most race aircraft, and if there is a Mayday in progress (which you would most likely not be aware oo, we need to ensure that runway is available. Race Control will then direct you to switch to the primary Race Control Frequency (133.3) and call them when ready to take off. 133.3 is also the frequency on which we control Race Aircraft on the racecourse and in the pattern. As such, please limit communication on that frequency to that which is operationally necessary. The reason we effect this frequency change (122.7 to 133.3) is to provide better situational awareness to any race aircraft that might be airborne (not on the racecourse). Based on your stated departure desires coupled with what is going on around the airport at that time, Race Control will assign you a direction of departure. Unless operationally unsafe to you, please adhere to those directions and if you can’t, inform “Race Control”. Southerly departures are preferred, but if required, straight outs off of 8 or 26 will normally be approved. A word of caution: if there is a strong wind out of the South be very careful not to drift north into the waived airspace. Commencing a departure turn to the North will only be approved after you are at least 4 NM east or west of the field dependent on your takeoff direction. Remain up 133.3 until well clear of the airport traffic area. Switch as appropriate to NorCal Approach (126.3) or other desired en-route frequency. Non-participant departures off of any runway will never be allowed while Race Aircraft are on the racecourse, (in this case you can be cleared to taxi but not take off).

Check in with “Race Control” with position and altitude on 122.7 by 10nm from RTS and state you have “Information PRS” after listening to the AWOS broadcast on 135.175. Race Control will then direct you to proceed inbound and in most cases, be assigned an appropriate downwind entry on the South side of the airfield. In some cases, straight-ins will be approved, i.e. landing on Runway 26 when arriving from the East or Runway 08 when approaching from tell the West. Race Control will then you to switch “Race Control” on 133.3 when arriving at a specific point, (i.e. on downwind or three to four miles on a straight in final) and to check in on that new frequency again with your position. As you know, normal uncontrolled downwind arrival procedures at Reno Stead are on the North side of Runways 8/26 (left hand pattern to Runway 08 and right hand pattern to Runway 26) However during the hours of PRS Operations, all non-participant patterns will be flown on the south side of the airport. So for Runway 26 it will be a left hand pattern and for Runway 08 it will be a right hand pattern. Fly 5850/6250 ft MSL (depending on type of aircraft) on downwind per Reno Stead published procedures or as assigned by Race Control. Another word of caution: be aware of an overshooting cross wind (wind from the South), and do not allow yourself, while turning final, to drift north of the extended centerline of 8/26. Once clear of the runway, switch back to 122.7 and pass to “Race Control” where you want to taxi.

(1)    A separate “kneeboard” card that summarizes the above listed procedures will be promulgated separately to all tenants in early June. In addition, that document will list PRS, operational hours and non-participant departure/ arrival slot times.

(2)    Be heads up for other aircraft; if something does not look/ feel right, speak up.

(3)    Flight operations during PRS can be very dynamic, so be prepared for departure and arrival delays and changes. Please adhere to all Race Control direction.

(4)    Listen to the complete AWOS transmission on 135.175 prior to departure or arrival, as pertinent information applicable to operations during PRS will be broadcast.

(7)    BLM will have aircraft (#’s and type dependent on conditions and if there are any fires in the area) at the east end of the field on alert in case they are called on to fight a fire. If this occurs, their departures and arrivals take precedence over aother airfield operations.

(8)    Remember for any assistance in moving your aircraft to or from your hangar call the Airport Staff or RARA points of contact at the phone numbers previously provided.

(10) Transient aircraft will be required to obtain a PPR # prior to operating in and out of Stead Field during PRS 2014 and the field will be NOTAM’ed as such. A PPR can be obtained in advance from the Airport Manager. Stead Tenant Aircraft are immune from this requirement. 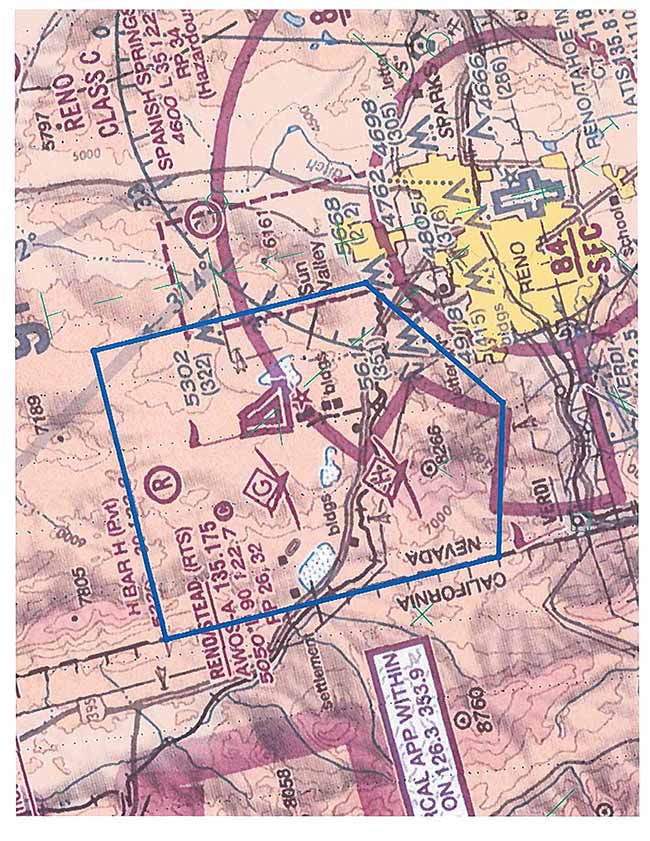