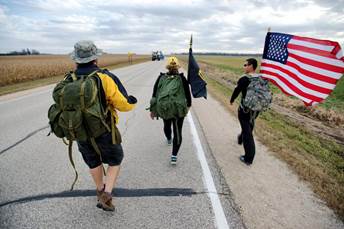 Join us in celebrating the 75th Anniversary of the Reno- Stead Airport!

In October 1942, Reno Army Air Base began operations at what was later the 192nd Fighter Squadron Nevada Air National Guard and finally named Stead Air Force Base. The base was most notably known as home to the Strategic Air Command’s Survival School, Flying Training Wing (helicopters), and Reno Air Defense Sector (ADC). In 1996, the city of Reno acquired the airfield and Reno-Stead Airport began operating as a public use airport under the Reno-Tahoe Airport Authority.

To commemorate this military history and the memory of carrying a full rucksack, the Reno-Tahoe Airport Authority is hosting a Ruck March on November 4th at the Reno-Stead Airport at 8 am.  Participants can walk/run the 10K course around the airfield without a rucksack for a small registration fee, or fill a rucksack with non-perishable food.  A BBQ lunch will be held at the end of the march.  All Friends of Reno-Stead Airport and Military Members are invited to attend up to 200 participants.